An example of debt contagion 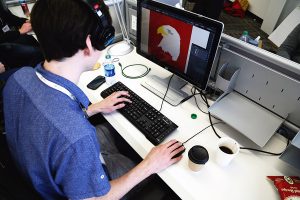 Instead of asking our CRUSH users to find an alternative to CRUSH, we defer the Windows 8 upgrade. We’re hoping that CRUSH for Windows 10 will soon arrive. Meanwhile, other Windows 8 users are happy to continue using Windows 8. Some of them have acquired—and have grown fond of using—another similar (fictional) scriptable package called REMOTE. REMOTE is also unavailable for Windows 10. Worse, the CRUSH user community is continuing to grow.

Thus, by deferring the Windows 8 upgrade, we’ve made space for additional problems preventing the upgrade to Windows 10. The technical debt associated with the Windows 8 upgrade now includes Windows 8 itself, and all the scripts, documents, and knowledge that are accumulating for both CRUSH and REMOTE.

Lessons learned from this example

The lesson here isn’t to ban scriptable applications. Nor is the lesson to compel desktop users to adhere to an enterprise standard. Both options create numerous problems. The main lesson this example provdes is that deferring debt retirement can enable formation of new instances of existing technical debt. In this example, the new debt includes the growth of the CRUSH user community with the assets they continue to develop, New debt also includes unrelated debt connected with the introduction of REMOTE. Thus, if we defer retirement of one class of technical debt, we must consider all costs of such deferment. Those additional costs can include expansion of the total volume of technical debt, and all its consequences, as expressed as metaphorical interest charges and MPrin.

Some of the new technical debt that forms when we leave existing debt in place is closely related to the existing debt. For example, once we’ve implemented some part of an asset in a way that we now acknowledge contains a form of technical debt, we tend to apply that same approach when we undertake extensions or enhancements, rather than using what everyone might acknowledge is a superior approach.

Martini and Bosch have identified a phenomenon they call debt contagion [Martini 2015]. Because of debt contagion, creating new system elements in forms compatible with elements already identified as debt causes debt propagation. This practice helps us maintain some degree of uniformity in the asset, recognizing that in doing so we’re increasing the MPrin of a given class of technical debt. These future expansions of MPrin can be difficult to predict at the time we first incur the debt, or at any time.

Our final example illustrates how hardware and software interfaces can propagate technical debt. This is ironic, because interfaces were conceived to insulate one portion of an asset from others. Given a system S composed of modules, suppose that module M of S provides services other modules of S. M does contain technical debt, of a form whose retirement would simplify M’s interface. Because that change would require changes to the modules that use M’s services, we decide to defer retiring M’s debt. Meanwhile, other projects are introducing new modules into S, and, of course, they must use M’s existing interface. The MPrin of the technical debt associated with M’s interface thus expands.

Unless we provide an alternate version of M (call it M’) or an alternate interface to M, MPrin expansion can repeat whenever new modules appear in S. But even if we do provide alternatives, engineers must consciously adopt them. Although some will, others might not. Some are under severe schedule pressure. Some cannot or will not learn the new approaches. And some receive direct orders not to use the new approaches. The MPrin associated with M can thus continue to expand, albeit perhaps at a reduced rate.